Note: For the OCDP Convention, it's the BB Dems board's understanding that we have 7 OCDP County Committee Member slots available, although that could be wrong. We have several people interested in some of these positions already.

The official eligibility criteria are listed below, but the BB Dems board will only be approving BB Dems members who have paid their dues for 2019 and who live in one of the 6 communities served by the Club: Birmingham, Bloomfield Hills, Bloomfield Township, Franklin Village, Bingham Farms or Beverly Hills. 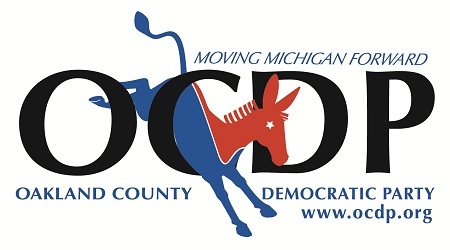 The Oakland County Democratic Party will meet in Convention

Proportional Voting Plan: Any delegate or group of delegates may submit a list or slate. The number of names on a slate may be as few as one person or any number up to the number to be elected. Candidates must agree to appear on a slate. Candidates on each slate are announced in the order in which they appear on the submitted list. Each delegate has one vote, which is cast for a particular slate.

Immediately Following the County Convention is
A Call to Elected County Committee Members:

The purpose of the meeting will be to elect officers of the County Committee to serve 2 years.

Officers to be elected: